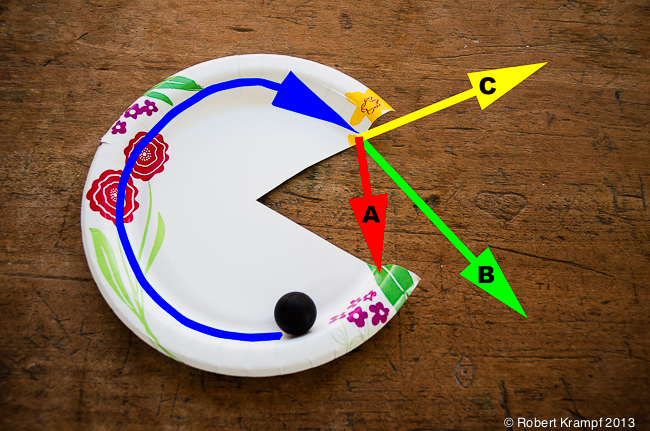 This experiment started out as a Science Photo Challenge and got such a great response that I wanted you to experiment with it yourself. It is a wonderful physic puzzle, and offers interesting insights into the science of force and motion.

Lets start with the question from the Science Photo.

If I roll the ball around the paper plate in the direction of the blue arrow, when it gets to the place where I cut out part of the plate, which path will it take? A, B or C? Why?

Before you actually try it, give it some thought. Why? Why not just try it and find out? Because we want to do this scientifically, which means taking the time to think about it and make an informed prediction.

Think about what you know about the physics of force and motion. That may be based on what you have learned in science class, or it may be based on your own observations of the world around you. Either way, don't just guess. You may even want to write down your thoughts, as that usually helps you think more clearly and see any "holes" in your ideas. Don't worry. You don't have to show your notes to anyone.

By thinking about the science and making a prediction, you have just formed a hypothesis . Now will will perform an experiment to test that hypothesis.

Before you cut the plate, put it on a flat surface and put the marble on it. Give the marble a push, and notice that it rolls around the edge of the plate. Your push caused the marble to move. Inertia, which is described in Newton's First Law of Motion, tells us that unless there are other forces involved, an object in motion will continue in the same direction and at the same speed. If we see any changes in its direction or speed, we know that some other force is involved.

Watching our marble, both its direction and its speed are changing. Why does the marble change its direction? Because of the raised edge on the plate. As the marble pushes on the edge of the plate, the plate pushes back. That "push back" is known as centripetal force. (Not centrifugal force) The marble does not have enough energy to overcome that force, so its path is changed.

The marble's speed is also changing, which tells us that there is some other force acting on it. Why does it slow down? Mostly due to friction with the plate. 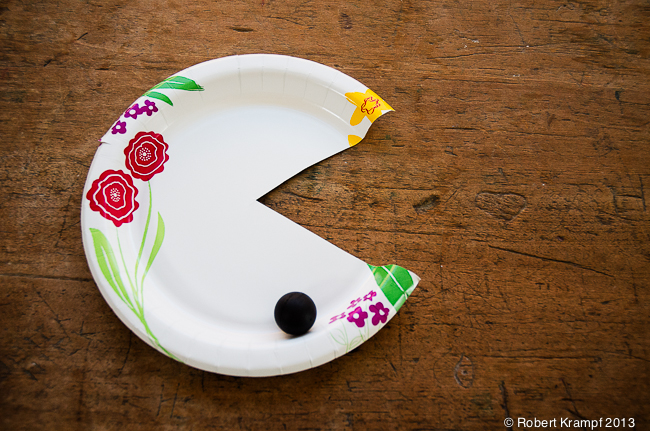 OK, now it is time to take the next step. Cut a section out of the paper plate. You can use the photo at the right as a guide for making your cut.

Finally! It is time to roll the marble, and see what happens. Try it. Which path did it take?

Unless you have other forces acting on your marble, you should find that it takes path B. Once the edge of the plate is removed, there is nothing to "push back" with centripetal force, so inertia causes the marble to travel in a straight line in the direction it was traveling when the paper plate ended.

For the marble to take path A, there would have to be something that was still providing centripetal force. That would involve using string, magnetic attraction, or something else that we don't have in this experiment.

For the marble to take path C, you would need some strong force pushing outwards, at an angle to the path the marble is following. If you were swinging a string that had a weight at the end, you would feel an outwards pull on the string, but if you released the string, the weight would take a path just like the marble did. 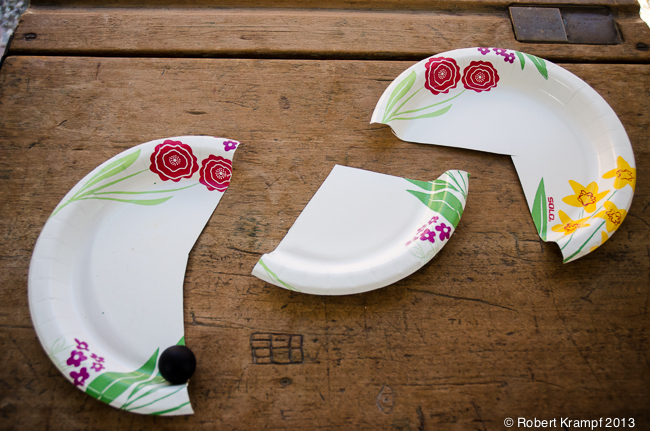 Want to use this knowledge to play some? Get several plates, and cut them at different angles. Place them so that the marble will move from one to the other. You may need to use some tape to hold them in place, and you will have to experiment with how hard you push the marble. Too hard, and it will overcome the centripetal force, jumping over the edge of the plate.