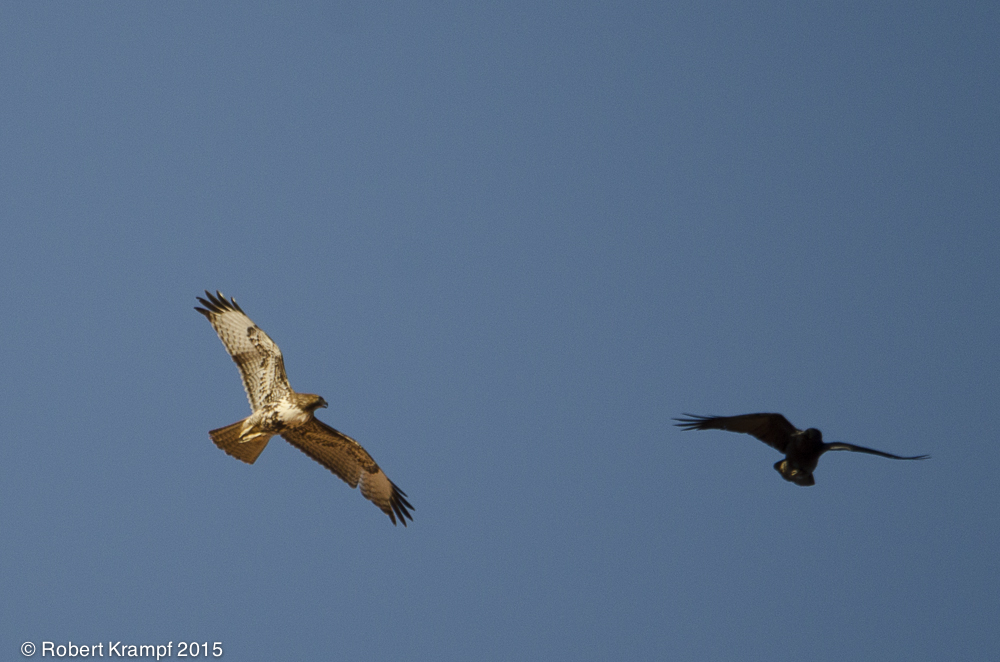 I had quite a show this week watching this pair. We get quite a few hawks and eagles here in Johnson Canyon, but usually the ravens harass them into moving on. They do that by squawking, diving at the hawk, and pestering them to the point where the hawk can't do any hunting. Eventually the hawk gets tired of it, and moves on. Many different birds have the same behavior, trying to drive large, predatory birds away. This time, things turned out differently. 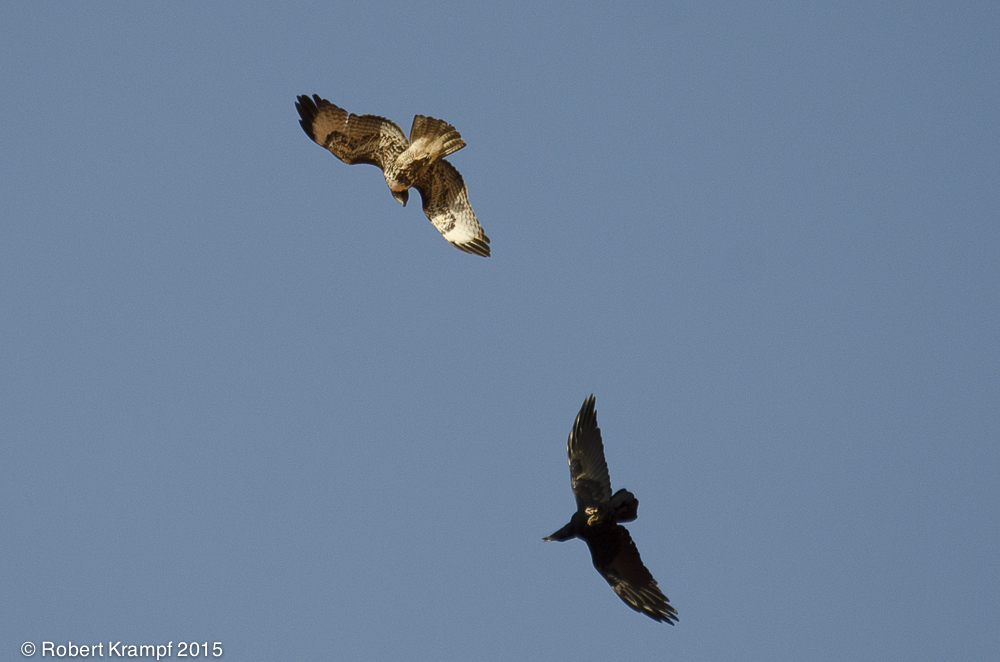 The first unusual part was that the hawk started screaming back at the raven. The scream of a Red Tailed Hawk is the "classic" hawk/eagle sound that you hear on TV or in the movies, so it caught my attention, especially since it was repeated over and over. 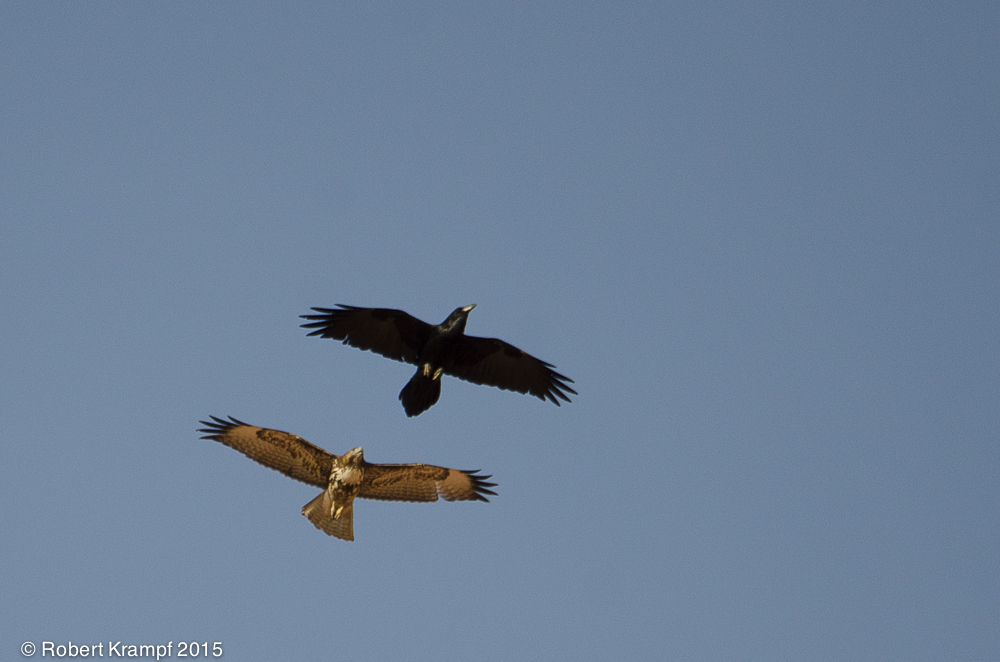 Then the hawk began to chase the raven. This was unusual, at least from my experience. Usually the hawk seems to be trying to ignore the raven instead of actively chasing it. 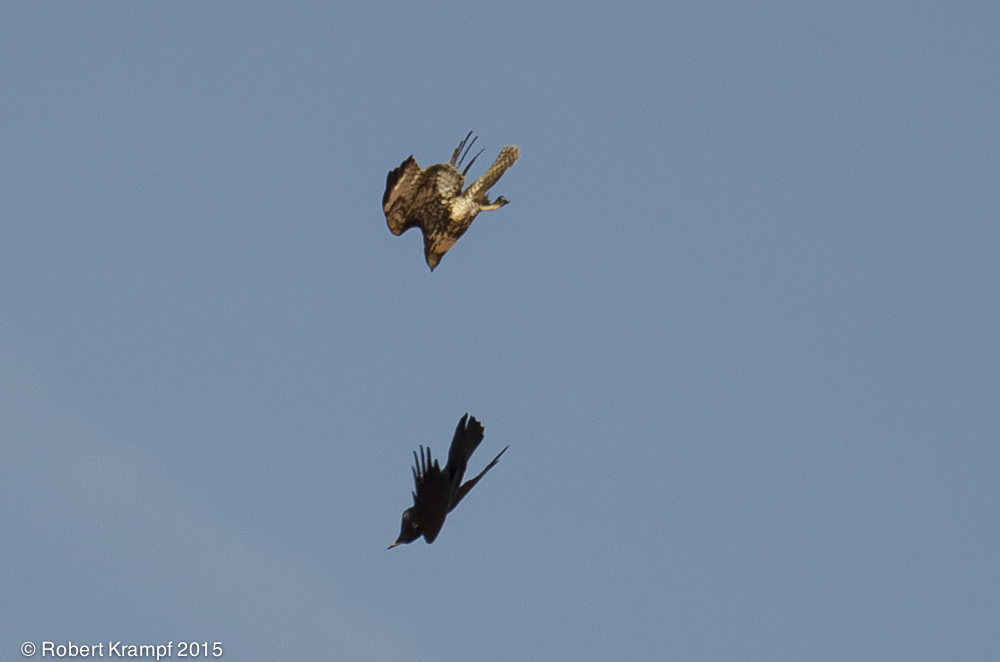 As the conflict continued, the hawk became more and more aggressive, and the raven started trying to get away. 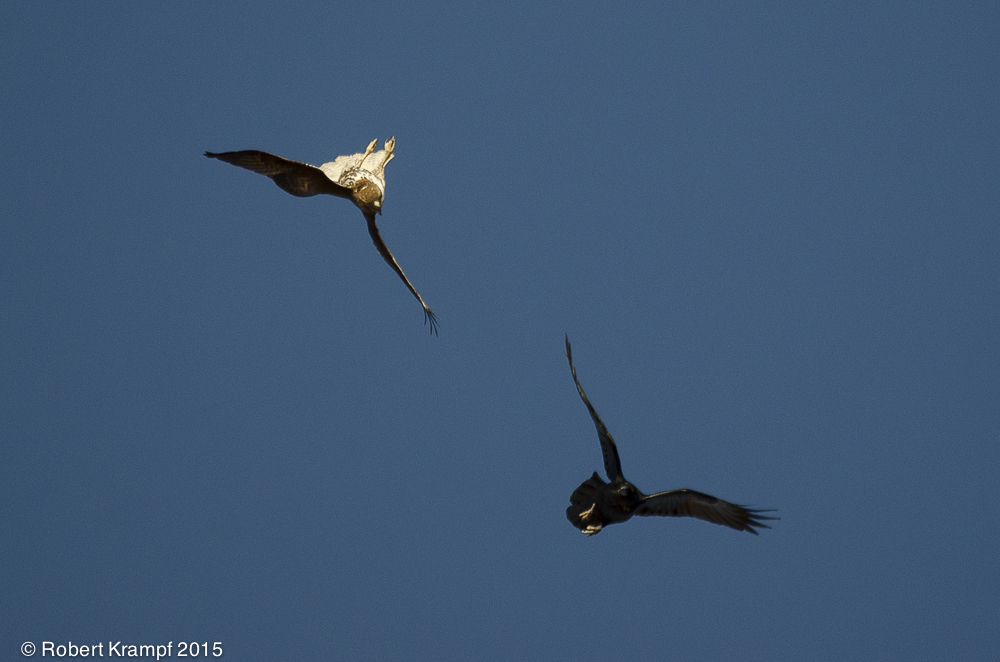 This lead to some amazing aerobatic flying, with both of them twisting, turning, and swooping. They were both screaming loudly at this point. 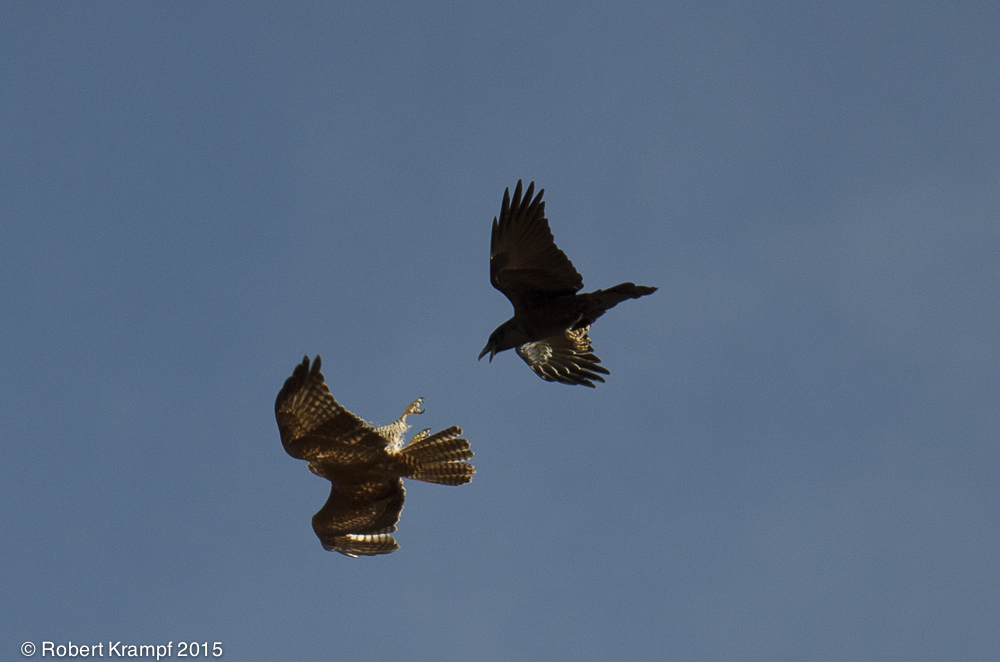 In the photo above, the hawk has flown in front of the raven, and then quickly flipped over to extend its claws. 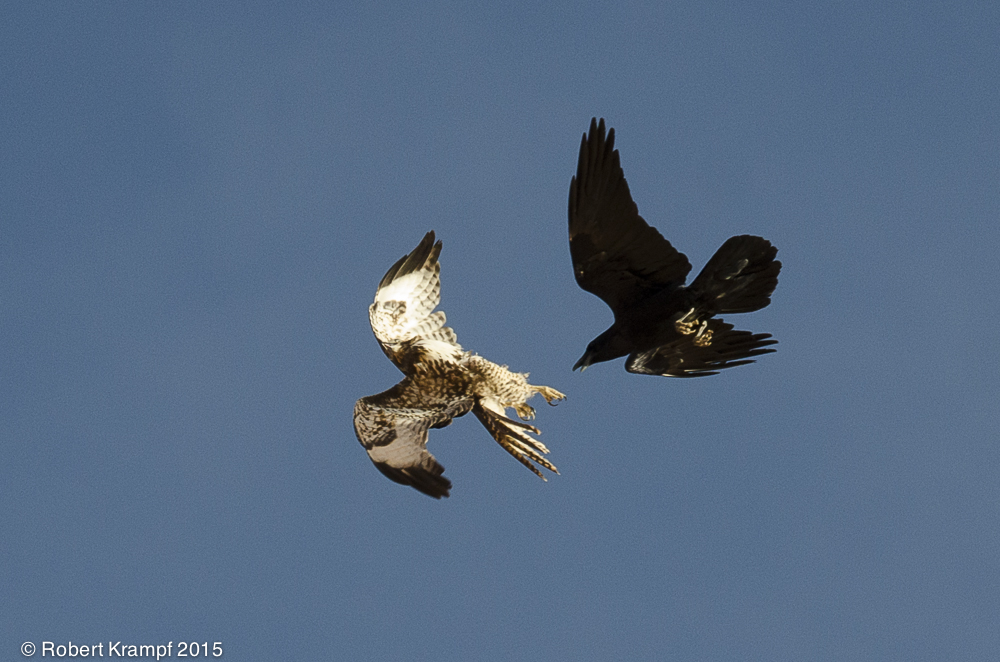 The raven narrowly avoided getting caught, and became very serious about getting away. 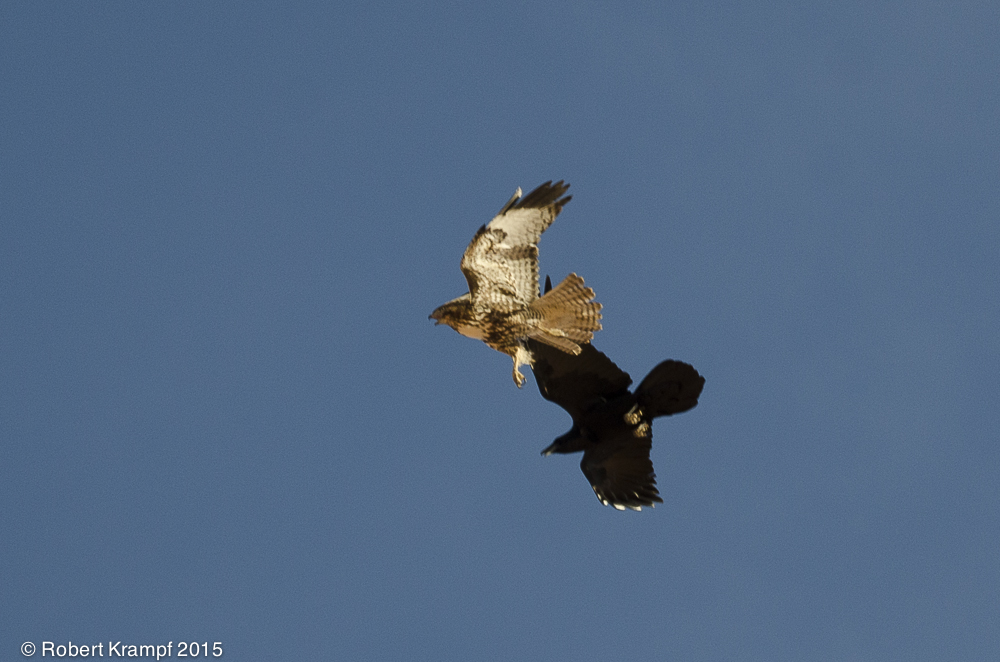 The hawk kept cutting off his escape, swooping and screaming. 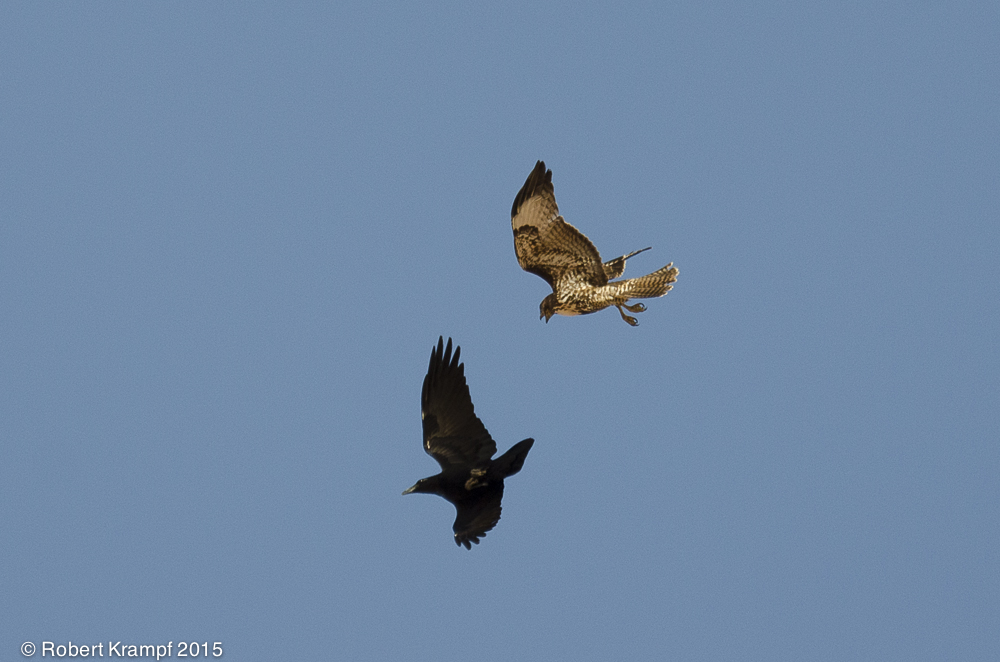 This was the last swoop that I saw before the pair disappeared over the top of the cliff. The raven probably got away, as they are incredibly nimble fliers, but this one will probably think twice before it tries harassing a hawk again.