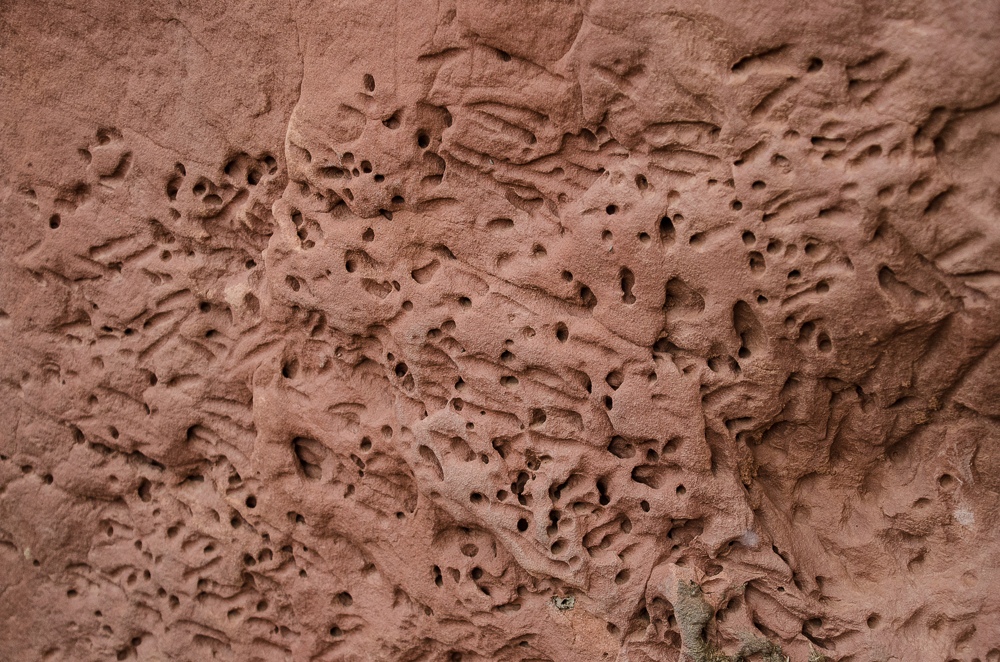 It all started with this sandstone.

My study of SW Utah’s native bees began with our local geology. While hiking in the canyon, I noticed several places where the sandstone that makes up the cliffs had large patches of branching, interconnected holes. My first thought was that they might be fossils, either from ancient burrows or from plant roots, but researching trace fossils in the Navajo Sandstone did not show anything that resembled what I was seeing.

My next step was to do a Google image search. Google lets you upload a photo, and then shows you other photos that are similar. I uploaded the photo above, and got lots of strange pictures that were not related to the holes in our sandstone, but among all of them, I found a photograph that looked very similar. It led me to this article: A new bee species that excavates sandstone nests

The holes in the sandstone were not fossils at all. Instead, they were burrows dug recently by a native bee called Anthophora pueblo. That article lead me to contact Dr. Michael C. Orr, one of the authors, to ask for more information. I am now corresponding with him to learn more about Anthophora pueblo, and other native bees in our area.

The holes are scraped out by the bees in layers of fairly soft sandstone. When a hole is abandoned, another bee moves in, digging it a bit deeper and making a chamber at the end to lay and egg and store food for the larva when it hatches. You can see the chain of chambers in the photo below. 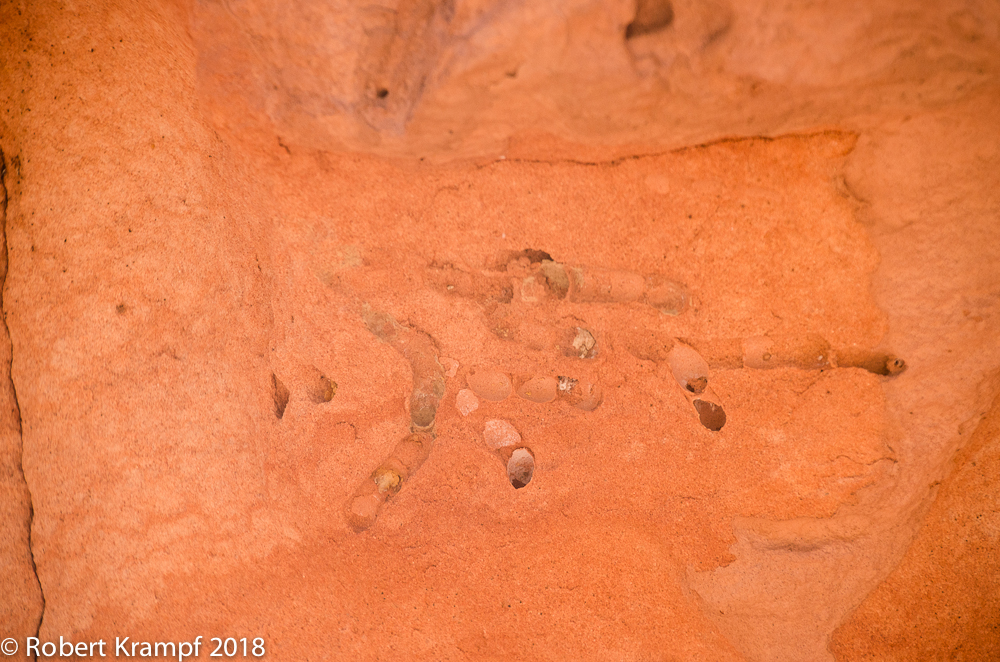 The Sandstone Bees will not be active for a few weeks. In the mean time, I am learning to identify some of the other native bees. I expected it to be pretty easy, but was surprised to find that there are more than 4000 species of native bees in North America. I began taking lots of photos, in hopes of identifying them. 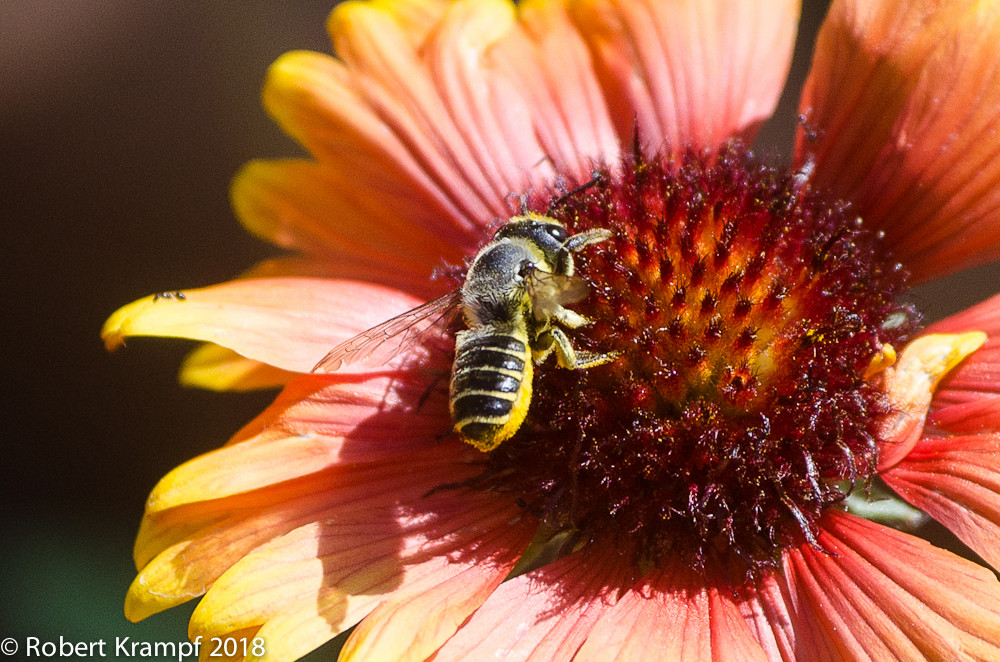 A female bee from the genus Megachile, the leafcutter bees.

With lots of help from Dr. Orr, I can sometimes get it down to genus. As I learned more, I started using a micro lens for my camera, and eventually using my microscope to examine them. To do that without hurting the bee, you first catch it in a net. Then you carefully transfer it to a jar, which you put in the refrigerator for about 4 hours. While it does not injure the bee, it causes it to go dormant, giving me about 5 minutes of photography before it starts to wiggle. I made a "bee lasso" from a plastic pipette and some thread to make it easy for me to turn the bee and move it around without hurting it. Once I finish, I take it outside and loosen the string to let the bee fly away. 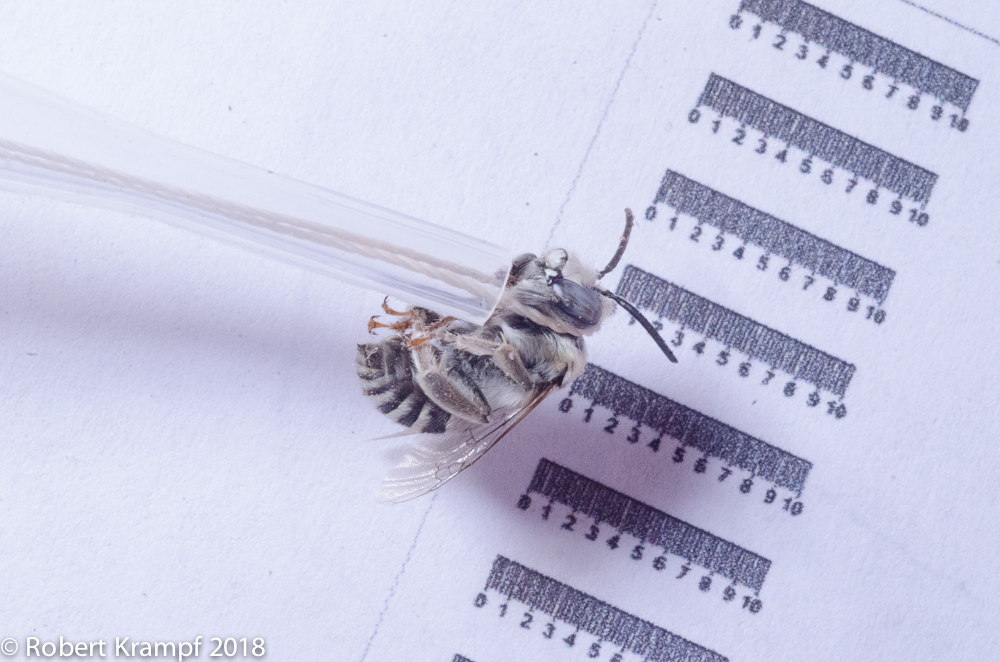 The bee above is Anthophora urbana, a relative of Anthophora pueblo. Bees in genus Anthophora are often called digger bees because they dig holes in the ground for their nest. Anthophora pueblo is unusual because it digs into the sandstone, which is much harder than dirt. As I continue to learn about native bees, I will keep you updated.