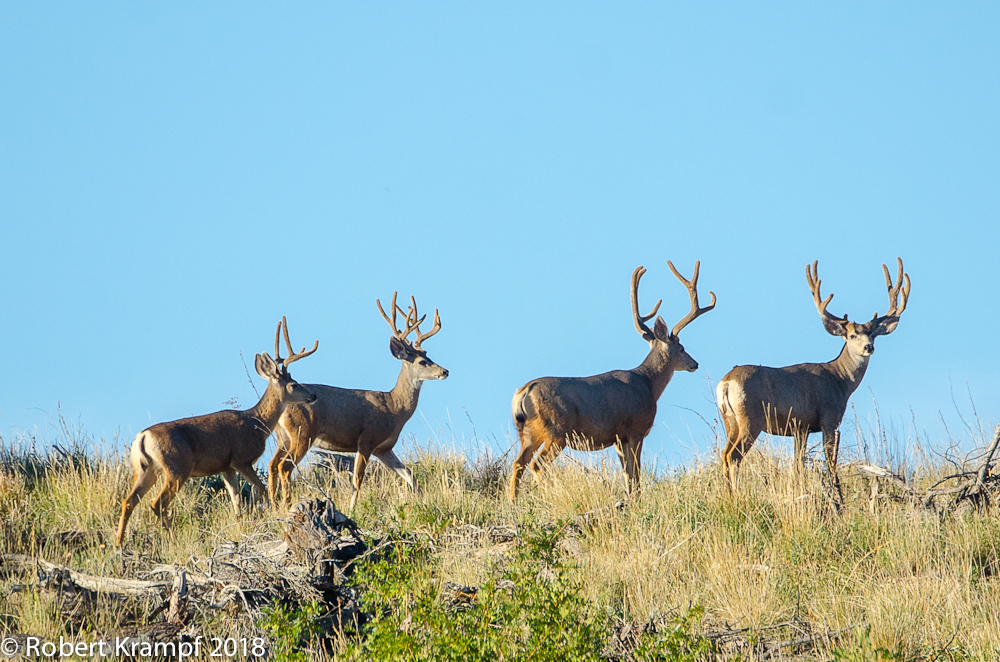 Our neighbor Mitch offered to take me a few miles north of the canyon to photograph the mule deer as they start to move southward. I'll get to see them later (in our yard), but seeing them now is special for several reasons. 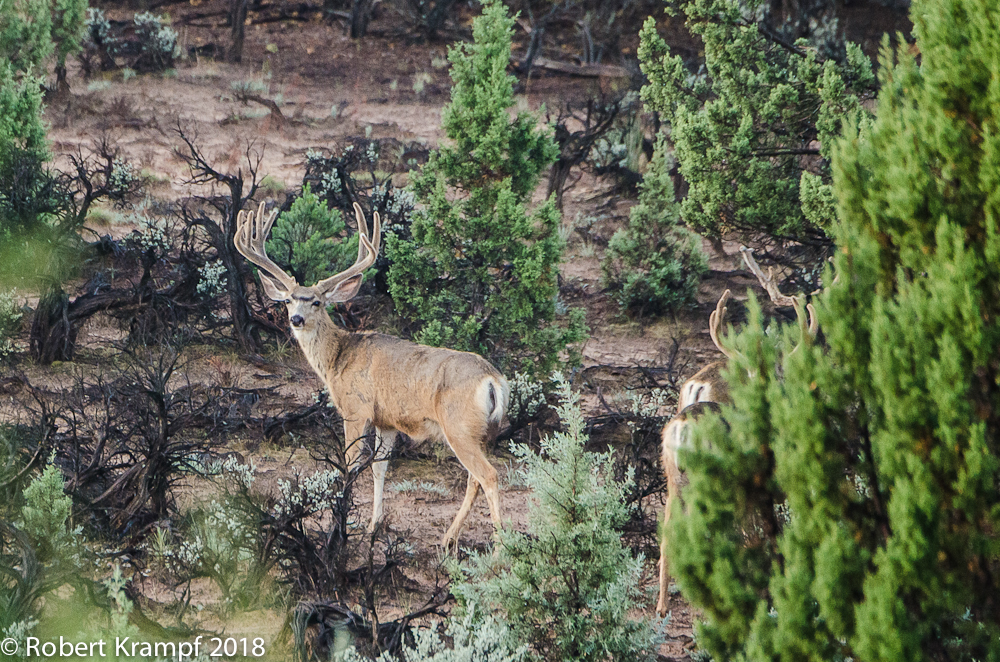 The first reason this was special is that now, the males (bucks) are still growing their antlers, so the antler is still covered with a layer of skin. This is called "velvet" because the skin is covered with short, soft hairs that look and feel like.....velvet. Once the antler finishes growing, the skin will start to die and peel away. The antler left behind is made of very dense, dead bone, but right now, their antlers are still living tissue, and still growing. 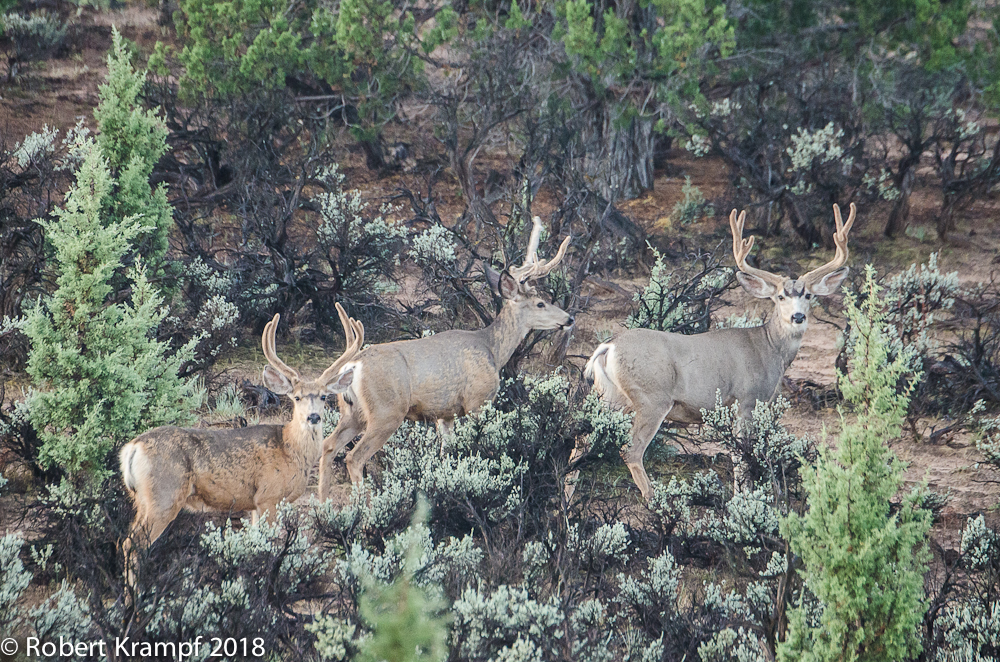 Another difference at this time of year is in their behavior. Later, when they move into the canyon, we will see groups of several does and one buck. At this time of year, before the mating season starts, the bucks tend to form bachelor groups. By staying together, they have more eyes and ears to alert them to danger. They also start developing a hierarchy, with some bucks being more dominant than others. 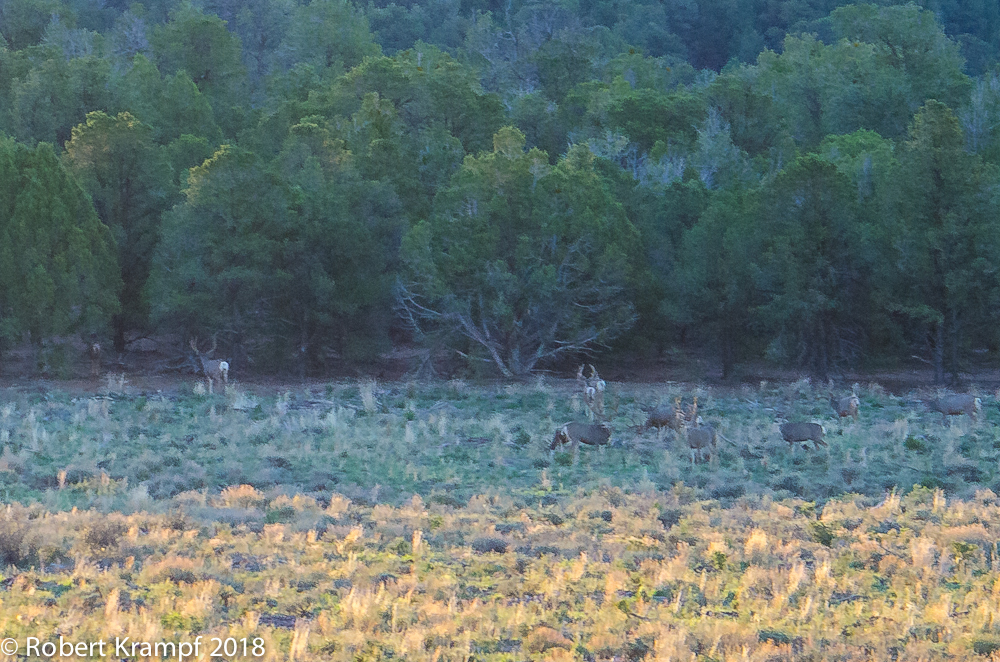 While bachelor groups are often small (3-4 bucks), some get quite a bit larger. In the photo above, you should be able to count 12 bucks. The 13th managed to get into the woods before I got his photo. 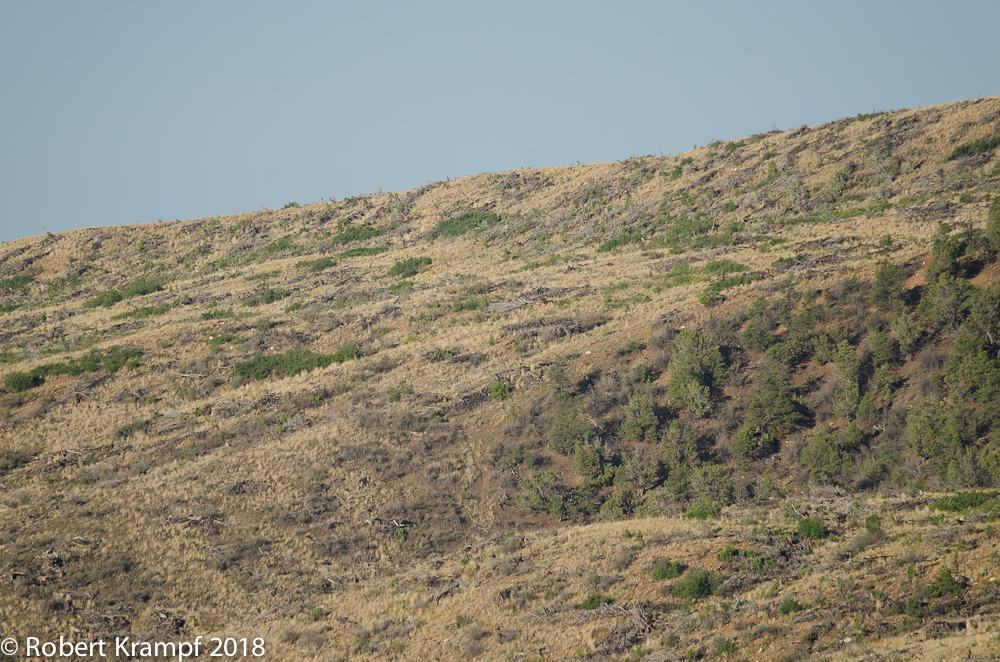 Hillside where mule deer are feeding

Another part of the fun is spotting the deer. I am not very good at it, but Mitch is incredible. Look at the photo above. Mitch pointed there, and told me that there were three deer feeding on the hillside. Keep in mind that this photo was taken through my 400 mm telephoto lens, so it is enlarged quite a bit from what we could see with our eyes. See if you can spot the deer. 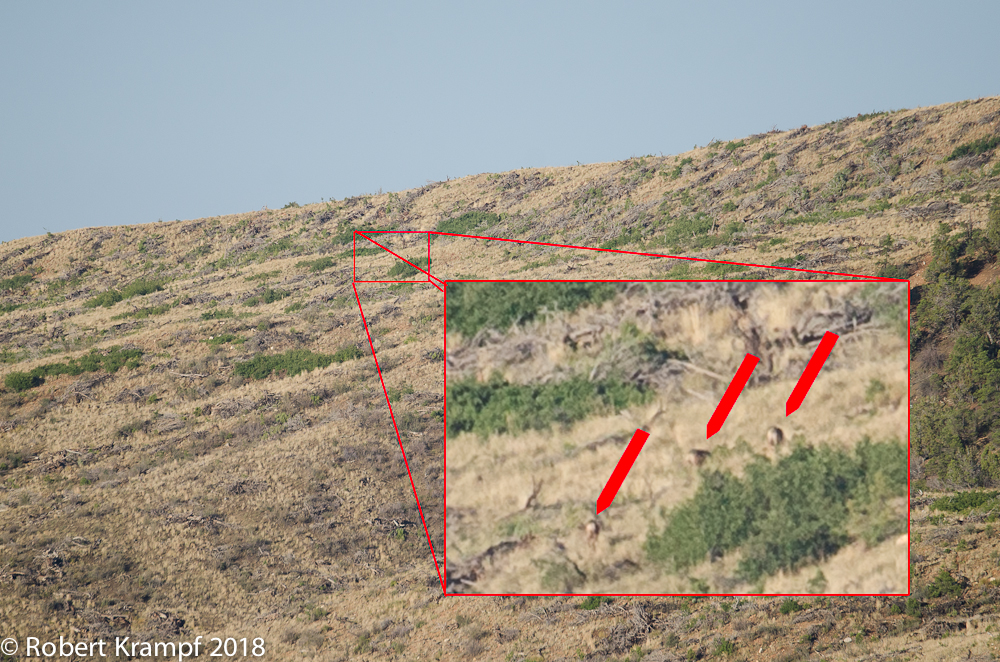 Don't worry if you could not find them, because I could not either until I got home and enlarged the photo. Zooming way in with Photoshop, I found the three mule deer feeding exactly where Mitch said they were. I asked him how he could spot so well, and he said it is a matter of training your eye to catch tiny movements. You have to hold your head and eyes very still, so that even a very tiny movement will register. 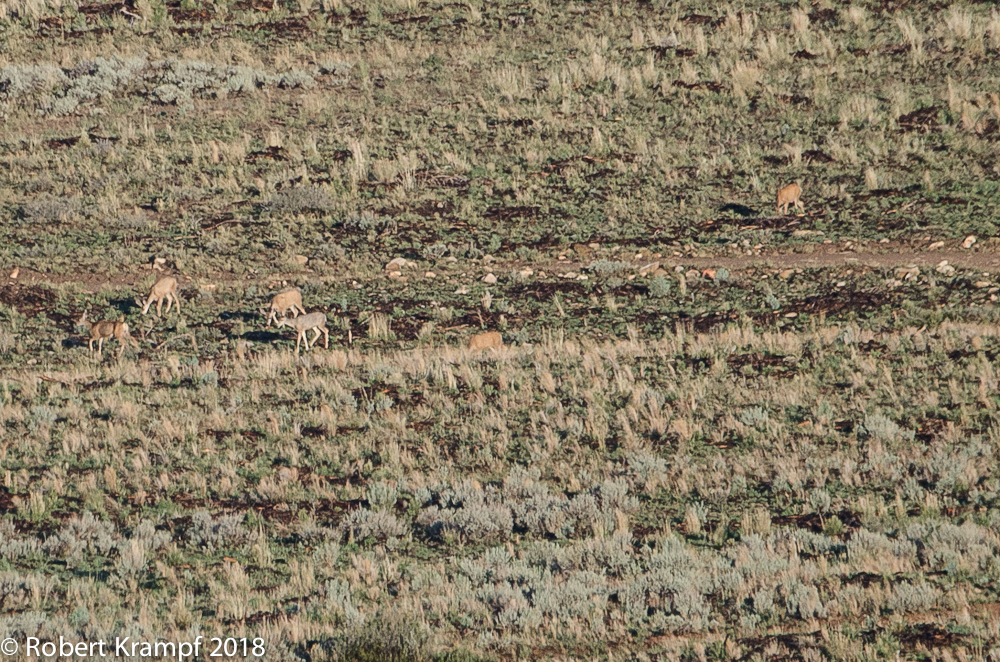 A group of does

The females (does) form their own groups, for the same reasons. With everyone looking, listening, and sniffing, a group can detect danger better than a single deer. 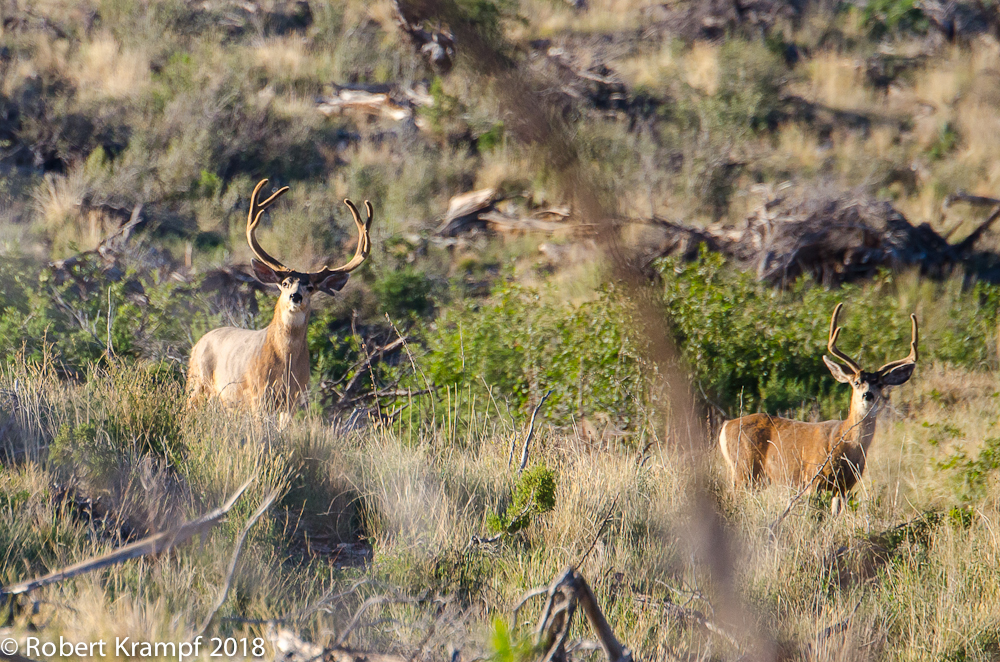 It is also fun just watching these amazing creatures in the wild. 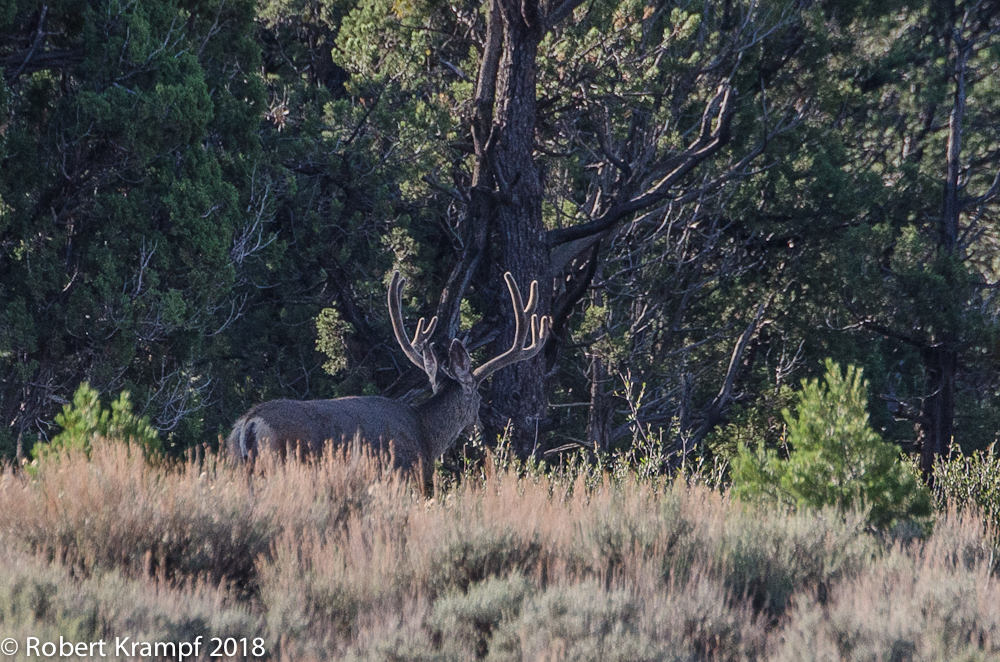 Buck disappearing into the trees

I enjoy seeing the beauty of the country, the challenge of getting near enough to get a good photo, and learning how to find the deer from an expert. 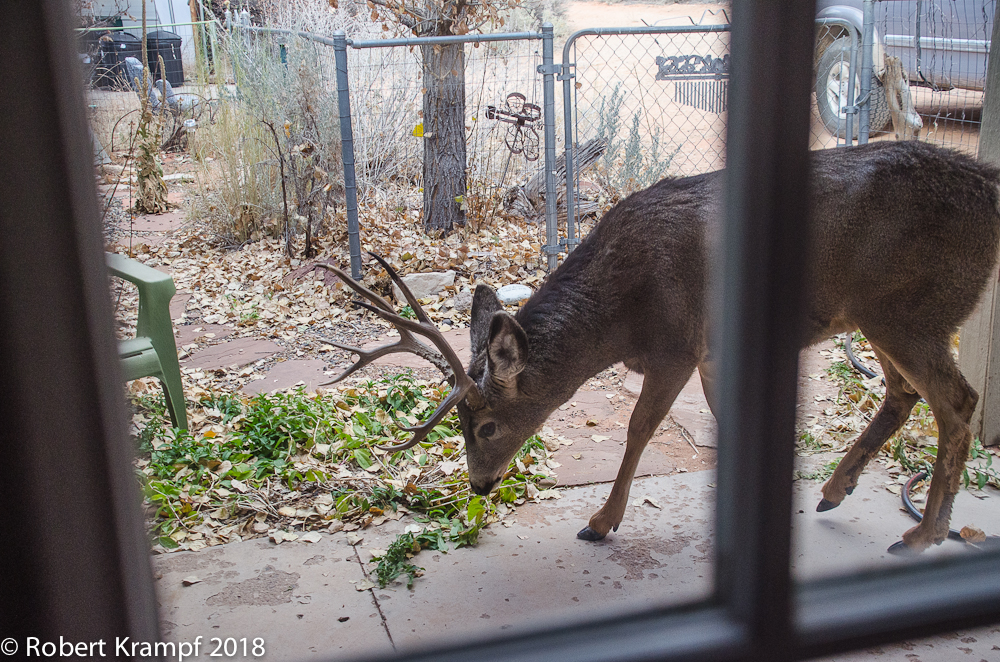 Mule deer buck in our yard

Later in the year, they will move south through Johnson Canyon. We will see them up close every day, often in our yard, but they will be very different then. Their antlers will be fully grown, without the velvet. The bucks will be mostly scattered, and will fight when they do meet up.

Next spring, the mule deer will move back north through our canyon. By then, the bucks will be shedding their antlers, which are often battered and broken from their contests. Then they almost immediately start the process of growing a new set of antlers, to prepare for next year.