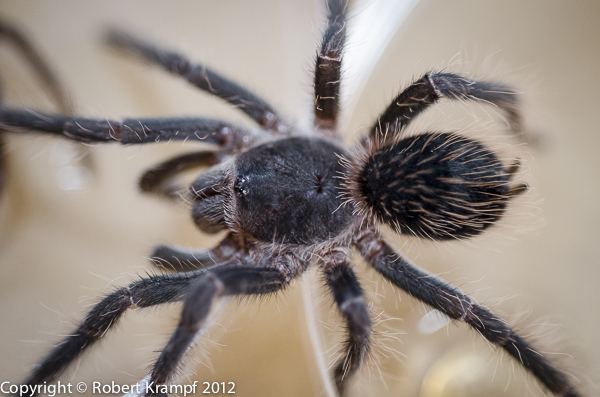 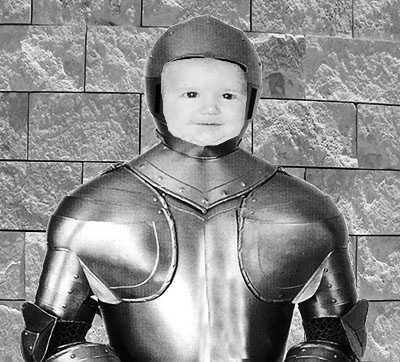 The most common analogy is to talk about wearing a suit of armor, so lets start there. Imagine me as a baby wearing a suit of armor. (Yes that is me, Photoshopped into the armor.) The armor would provide much more protection than an internal skeleton. No skinned knees if you fell down, no sunburn, and mosquitos would have a hard time finding a spot to bite. Sounds pretty good, but one problem probably occurs to you immediately. As I grew, very soon the armor would be too small.

Like a suit of armor, an exoskeleton is not living tissue. Your bones grow larger as you grow larger, but the exoskeleton of a spider does not. As the spider’s body gets larger, it starts to run out of space inside the exoskeleton. It reaches a point where it has to molt, taking off the old exoskeleton, so it can get bigger. 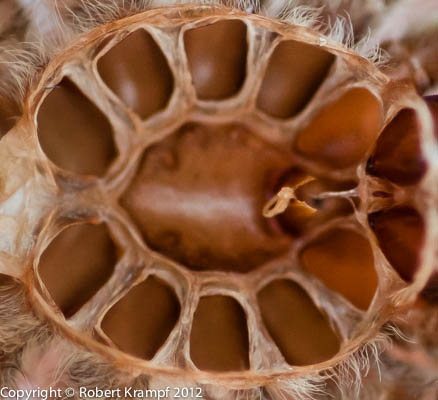 At that point, the analogy breaks down, because an exoskeleton is so much more than a suit of armor. It also serves as a place for muscles to attach, just as our internal skeletons do. How can the spider take off an exoskeleton that is still attached to its muscles? If the exoskeleton somehow detached from the muscles, how would it be able to move?

The exoskeleton also serves the same purpose as our skin. It keeps bodily fluids in (so the spider does not bleed to death) and keeps germs and other unpleasant things out. Imagine what it would be like if you took off your skin. Not a pleasant thought.

When the spider is ready to molt, its body produces an enzyme which dissolves the attachment between the old and new exoskeletons. It also weakens the old exoskeleton, allowing the spider to split the old shell at the proper place, and slowly pull out. 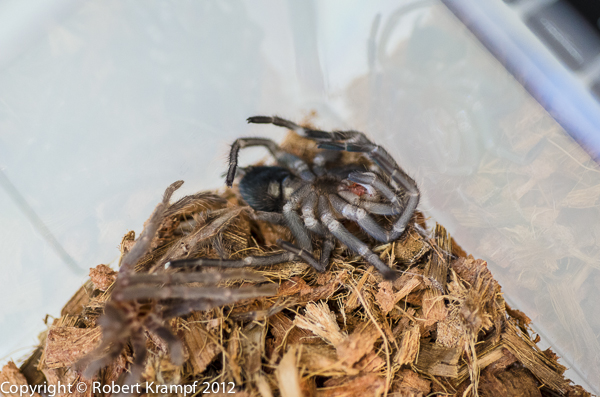 My spider just after molting.

Here is a time lapse video of Matilda molting.

This is a very difficult process for the spider. It has to move its legs and body, but it does not have a solid skeleton for its muscles to work with. It cannot walk and can’t even bite to protect itself, as its fangs are also a part of the exoskeleton, and are very soft at this point.

After it has pulled out of the old shell, it expands its body as much as possible, and holds that position until the new exoskeleton hardens. Then, it can relax in its nice, new, roomy suit of armor. 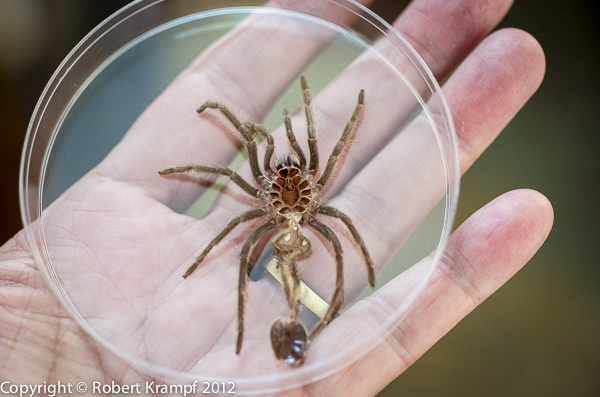 This method of growth means that spiders and other arthropods only get bigger when they molt. Now that my spider’s exoskeleton has hardened, it will not get any bigger (at least on the outside) until the next time it molts. By keeping the old exoskeletons, I can keep a record of the spider’s growth.

OK, so do all spiders molt? Yes. You can sometimes see old molts (which many people think are dead spiders) in or near spider webs.

How often does a spider molt? That depends on how much it has to eat. The more it eats, the faster it will outgrow its exoskeleton, just as those extra bowls of ice cream cause me to outgrow my jeans.