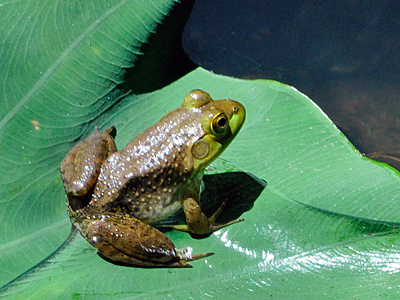 A food web is a way of seeing how energy is transferred from organism to organism. All living things need energy. They use it to move, to grow, to reproduce. That energy has to come from someplace. Drawing a food web is a great way to get an idea of how that energy is captured by producers, and passed from organism to organism. It helps us see that even things that we usually don't like, such as weeds and mosquitos, play an important role in the ecosystem. 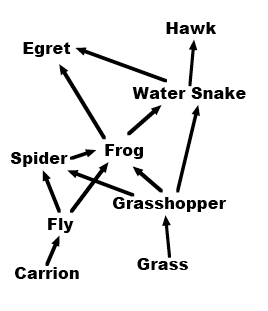 You start with a living thing. Any living thing. For this example, we will use a frog, but you could start with a rose, an elephant, or anything that is alive. Write its name in the center of the sheet of paper. Living things need energy to survive. Frogs get that energy from the things that they eat. What do frogs eat? Flies. OK, so write the word "Fly" on the paper, and draw an arrow from it to the word "Frog". That arrow shows us that the frog is getting energy from the fly. Do frogs eat other things? Yes, they also eat grasshoppers, so do the same thing with the word "Grasshopper". Try to think of at least two or three other things that frogs eat, and write them on the paper with arrows pointing towards the frog.

Next, think about things that eat frogs, such as water snakes and egrets. The frog contains energy from the things that it ate. An animal that ate the frog would get some of that energy. Write down at least two or three animals that might eat a frog, drawing arrows from the word "Frog" to them.

For each of the things you have added, add the things that it eats and the things that take its energy by eating it. Draw more arrows to show how the energy moves. As you add more and more organisms, you will quickly wind up with a drawing that looks like a spider web, full of criss-crossing lines and arrows. You are on your way towards seeing a food web. 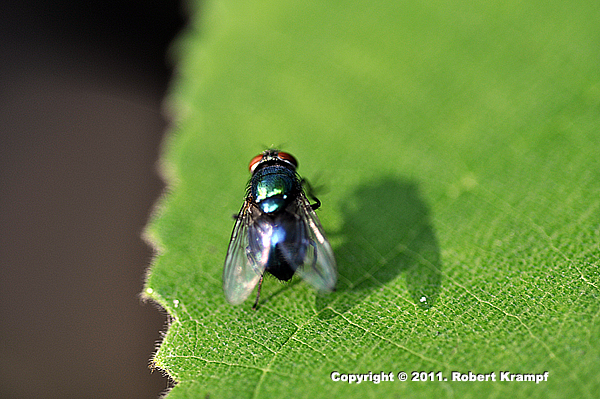 Once you have your food web drawn, then think about what would happen if you took things out of the web. A good example of that is a fly. If you have ever tried to have a pleasant picnic lunch outdoors, you have probably found yourself spending a lot of time waving flies away from your food. Why do we have to have flies? Wouldn't it be great if we could just get rid of them? Well, think about that for a minute. Look at the fly in your food web. What does it eat? Carrion. Flies eat dead things. Yes, there are other things that eat carrion too, but if flies were removed from an ecosystem that depends on them as scavengers, one of the strands in the food web is broken. Next look at the things that eat flies. Your frog would lose one of its food sources. The food energy that was moving from the dead things through the flies to the frog is now taking a different route. What if vultures ate the carrion instead of the flies? Frogs can't eat vultures, so the frog population would be getting less food energy.

But the results go far beyond that. With the loss of flies as a food source, the frogs either have to find other food to eat, or the decrease in food will mean that fewer frogs survive. If the frogs start eating butterflies, then the butterfly populations decrease. That could change the pollination of some plants, or the food supply of things that eat caterpillars. If there are fewer frogs, then the predators that eat frogs have less food to eat. That could mean that they eat more fish, reducing that population, or that the predators can't survive, which could let their other prey grow without control.

Removing an organism from a food web does not just change things for the living things that are connected directly to it in the web. The effects ripple through the web. That does not mean that the loss of any living thing will cause the web to collapse. If a plant or animal becomes extinct, the food web adapts. It might cause several other species to become extinct, if those species depended on the first. Other species might move in to fill the gaps. This happens all the time in nature, as environments change. 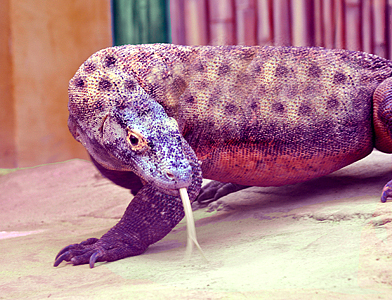 What about a different kind of change? Lets add a new creature to the web, a Purple Spotted Albanian Swamp Lizard. (Yes, I just made that up.) The lizard was someone's pet, and when they got tired of it, they released it in the local pond. Imagine that these lizards love to eat frogs. Also imagine that the Purple Spotted, Albanian Swamp Lizard tastes terrible, so the only animal that eats it is the Albanian Dancing Owl. (Yes, I made that one up too.) There are no Albanian Dancing Owls in your food web, because they don't live here. Now what will happen to your food web?

The Purple Spotted, Albanian Swamp Lizards start gobbling up the frogs, taking a large amount of that food energy from the food web. That would not be a problem if other predators were eating the Swamp Lizards to keep the energy flowing through the web. Instead, nothing here eats the Swamp Lizards. They keep eating frogs, and raising more Swamp Lizards. Again, the results ripple through the web. The snakes that eat frogs have lost a major food source. So have the herons, egrets, fish, and other frog-eating predators. With the Swamp Lizards eating most of the frogs, there are fewer things around to eat flies, which means that the number of flies increases. That is a good thing for the spiders that eat flies, but a bad thing for the ants that compete with flies for carrion.

So is a change to the food web a bad thing or a good thing? That depends on who you ask. If you could ask the spiders in our Swamp Lizard example, they would tell you that Purple Spotted, Albanian Swamp Lizards are the best thing that ever happened. Since they arrived, there are always plenty of flies to eat. On the other hand, if you could ask the frogs about the Purple Spotted, Albanian Swamp Lizards, you would get a very different answer. Any change to a food web will probably hurt some species, and benefit others. 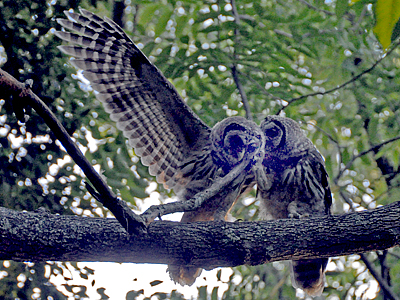 OK, can we fix this? Lets bring in some Albanian Dancing Owls, and release them. They eat Purple Spotted, Albanian Swamp Lizards, so that should put things back in balance, right? Not necessarily. Once they get here, the Dancing Owls may decide that rabbits taste better than Swamp Lizards. Instead of controlling the Swamp Lizards, they may add to the problem by eating all of the rabbits instead.

Making changes to a food web can have all sorts of unexpected results as they ripple through the web, sometimes with devastating results. Intentionally introducing a species or removing a species is something that could cause much more harm than good.