It's always good to start with the basics, so begin by thinking about sounds in general. We hear a sound because of waves traveling through the air. Just as dropping a stone into a pond causes waves to spread out across the water, popping a balloon, vibrating a guitar string, or singing a song causes waves to spread through the air. When those waves hit our ear drums, we hear the sound.

That means that the Whistle Stick must be producing waves in the air. But how? That is where the wooden spoon comes in. We will use it in place of the popsicle stick, and look at waves in water instead of air. Hold the wooden spoon between your palms, with the end of the spoon in a container of water. 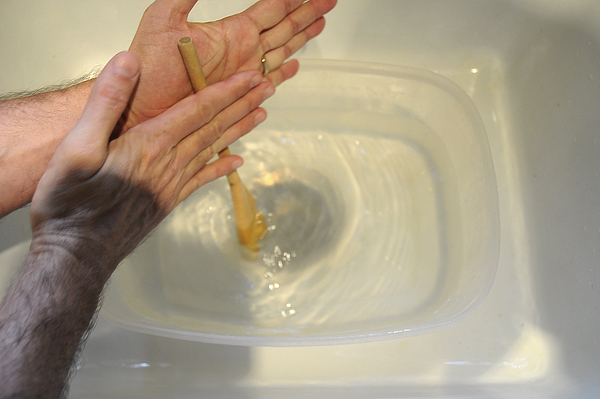 Slide your palms to twirl the spoon slowly in the water. As the spoon spins, it makes waves in the water. Try spinning it at different speeds, noticing how that changes the distance between the waves.

What you should notice is that as the spoon twirls, it pushes on the water to send out a wave. As you spin the spoon faster and faster, it makes more waves, and those waves get closer and closer together. 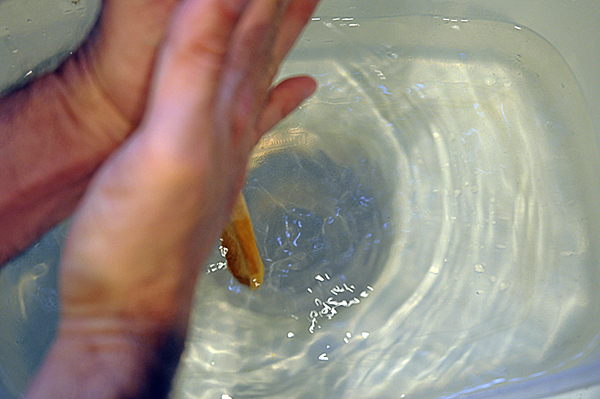 Now lets think about sound waves. The picture at the right shows a graph of the sound produced by the whistle stick. Notice that at the start of the sound, it reaches far up graph. The higher up the graph it goes, the closer together the sound waves are, and the higher the pitch of the sound.

If you click the picture, you can watch a short video, letting you hear the sound, seeing how the changing sound matches the graph.

It is much easier to see (and hear) if we slow things down. This graph shows the same sound, stretched out four times longer than the original. That lets us see the curve as the pitch falls.

Again, you can click the picture to watch a short video. Because it plays the sound slower, it is easier to see (and hear) that the sound begins with a high pitch (waves very close together), and then the pitch falls as the waves get farther apart.

Now lets put that all together. Like the wooden spoon, the faster the popsicle stick spins, the closer together the waves will be, and the higher the pitch of its sound. When you first snap your fingers, the Whistle Stick spins very fast, making a high pitched sound. As it pushes against the air to produce those waves, it gives up some of its energy of motion. That causes it to spin slower, producing a lower pitched sound. Looking at the graph, we can see that the rate of spin slows very quickly at first, and then more gradually.

If you remember from last week, I also made a Whistle Stick from a tongue depressor that was much wider. it made a much lower pitched sound, that did not last nearly as long. Why? The wider blade had to push against more air, transferring the energy of motion much faster, causing the speed of its spinning to drop much faster.

If you want to do some experimenting, you might try cutting notches into the sides of the stick or doing other things to change its shape. Do you think that would change the sound? Sounds like a good reason to eat more popsicles to me.