This shot is from my Floating Bubbles video. The balloon is filled with helium. Where does helium come from?

While helium is one of the most common elements in the universe (about 23% of the visible matter), most of it is in stars, and it is relatively rare here on Earth (only about 0.000001% of the mass of the Earth). The helium for your helium balloons is extracted from natural gas deposits underground, mostly from Kansas, Oklahoma, and Texas.

The helium in stars is produced by fusion (hydrogen atoms being forced together under extreme heat and pressure), the helium we use was produced by fission (radioactive atoms breaking apart). This is a slow process, and we are using it up far faster than it is being produced. 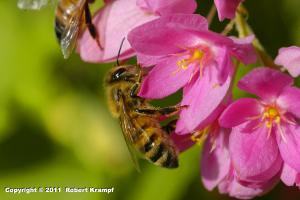 Question:
How do Honeybees deal with insects that invade their hive?