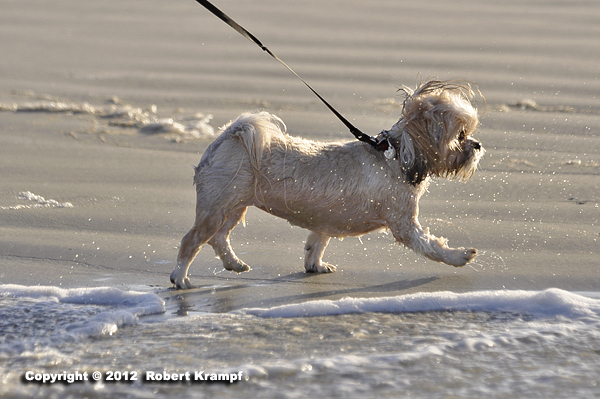 Do dogs see in color?

Yes, dogs see in color, but not the same colors that we see. To understand that, we need to begin with human eyes. Your eyes contain several different kinds of light sensitive cells. You have rod cells that are very sensitive to light, but not to color. Rod cells help us see movement, and let us see in very dim light. You also (probably) have three kinds of cone cells. Some cone cells are sensitive to red light, some to green light, and some to blue light. Our eyes see mixtures of those colors. These are also the colors that make up the image on your television and computer screen. Animals that have three types of cones are called Trichromats. Humans, some primates, some monkeys, and some marsupials are red/green/blue Trichromats. Some insects are Trichromats too, but instead of red/green/blue, they see blue/green/ultraviolet. Each kind of cone can distinguish about 100 shades, which means that most Trichromats can distinguish about one million different colors.

Dogs, like most other mammals, are Dichromats. With only two kinds of cones, dogs see yellow and blue, but do not seem to be able to distinguish red and green. To them, that red dog toy blends in with the grass of your yard. If you want toys that are easy for your dog to see, stick with yellows and blues. With only two kinds of cones, it is thought that most Dichromats can distinguish about ten thousand colors.

Now, before you start to think that poor dogs are deprived of some of the world's beauty, keep in mind that some animals see more colors than we do. Most birds are Tetrachromats, with four kinds of cones: red/green/blue/ ultraviolet. So are some fish, some amphibians, some reptiles, some spiders, and many insects. Four kinds of cones could let them distinguish about one hundred million colors.

Pigeons and butterflies have it even better. They are Pentachromats, with five kinds of cones. That lowly pigeon sitting on the buildings of your city may be able to distinguish up to ten billion different colors.

Going the other way, whales, dolphins, seals, sea lions, walrus, and owl monkeys are Monochromats. With only one kind of cone, they have a very limited range of colors, and may not see color at all. 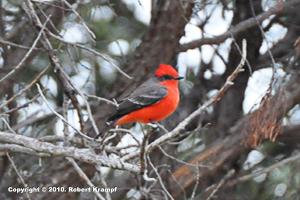 Question:
The light was dim, so I did not get a very good shot, but its enough to identify him. What is he?