At first, many people are puzzled when they learn about magma and lava. They are both exactly the same stuff! The only difference is that it is called magma while it is underground, and lava when it is on the surface. Why do we need two different words for it? As you will see, the rocks formed underground by magma are very different from the rocks that form on the surface from lava. As you see how different those rocks are, you will get a better understanding of why we use "magma" and "lava".

If magma cools into rock while it is still underground, it forms intrusive rocks. Because the magma is underground, it cools very slowly, allowing the minerals to form crystals or grains large enough to be easily seen without a magnifying glass. Grains are the pieces of individual minerals. In the photo below, each of the pink, white, and gray bits is a grain. Examples of intrusive rocks include granite, gabbro, and pegmatite. 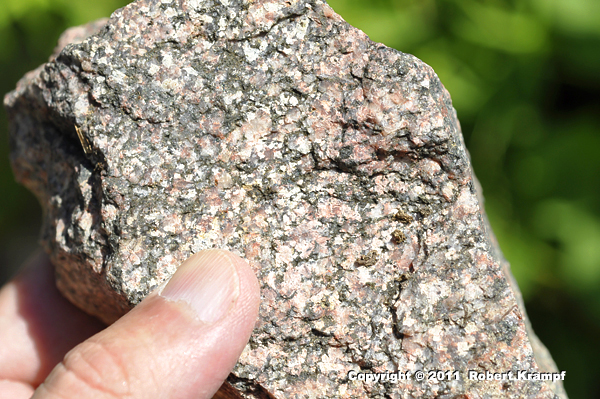 Granite is a common intrusive rock. Notice the large grains of pink, white, and gray minerals.

If the magma forces its way to the surface, it is then called lava, which cools and hardens into extrusive rocks. The lava cools much faster on the surface, so the minerals either form crystals that are too small to see easily, or else it forms a volcanic glass with no crystals at all. Extrusive rocks may have a few grains that are large enough to see, but most of them will be too small to see individual minerals. Examples of extrusive rocks include basalt, rhyolite, obsidian, scoria, and pumice. 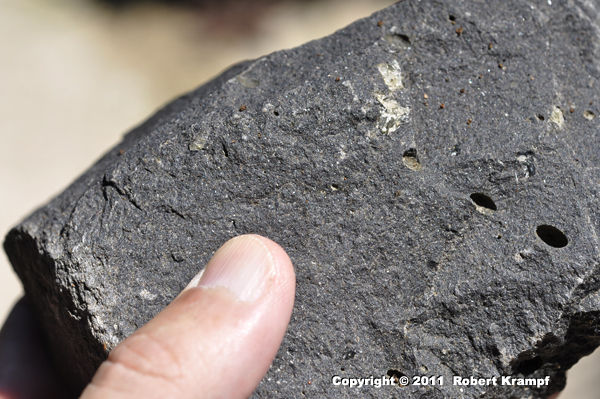 Basalt is a common extrusive rock. The individual mineral grains are almost too small to see.

Now that you have the basics, it is time to see the process in action with the Igneous Sugar activity.