Have you ever wondered what it was like to be a scientific explorer? Imagine what it was like for Lewis and Clark, as they encountered plants, animals, and geology that they had never heard of before. Imagine discovering the first dinosaur eggs with Roy Chapman Andrews in the Gobi Desert, or taking a scientific expedition around the world with Charles Darwin. We tend to think that everything has been explored, and that the only places for new discoveries are on distant planets, but with a microscope, you can explore a world that still has many undiscovered secrets. 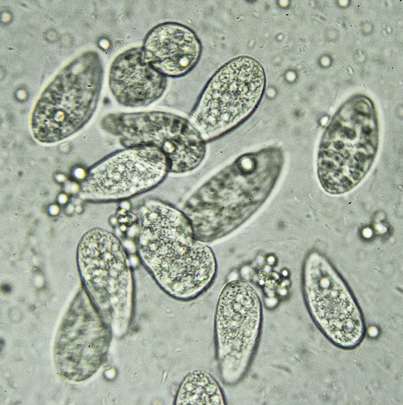 Wait a minute. Microscopes have been around for a long time. How could there still be things that scientists have not found? How many teams of scientists have you seen crawling through your back yard with microscopes? Probably none. Now think about you back yard on the scale of a microscopic organism such as a one of the ciliates you find in a drop of pond water. It is about 200 microns long, which is VERY tiny. If you had 127 of them, lined up end to end, the line would be about an inch long.

Using the scale of this ciliate, Lewis and Clark's 8000 mile journey would be about 23 feet. With living things that tiny, you could spend years exploring your back yard, and still not see it all. You have a lifetime of unexplored territory in your own back yard.

Beyond living things, there is also a tremendous amount of micro-geology in your yard. What appears to be just dirt to our eye becomes a treasure trove of crystals, minerals, and fossils under the microscope. Much of that dirt started out as rocks and minerals, and you can find bits of them with some careful searching. As my Micropaleontology professor in college liked to say, "The great thing about micro-geology is that you can carry your entire collection around in your pocket." With a polarizing filter, you can identify individual crystals in rocks, and even watch crystals growing.

Microscopes play a huge role in forensic science. Evidence at a crime scene is often microscopic, from the details of a fingerprint to the components in a soil sample. If you enjoy television programs such as CSI, the microscope will hold many hours of exciting investigations for you.