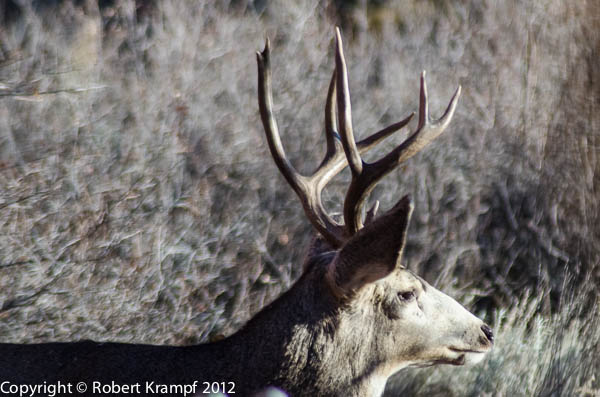 Notice that the very back point on this Mule Deer's antlers is split. This is a genetic trait which is becoming more and more common because hunters would rather shoot deer with perfect antlers. This is an example of:

SC.5.L.15.1 Describe how, when the environment changes, differences between individuals allow some plants and animals to survive and reproduce while others die or move to new locations.
SC.7.L.15.2 Explore the scientific theory of evolution by recognizing and explaining ways in which genetic variation and environmental factors contribute to evolution by natural selection and diversity of organisms.

UT.5.V.2.c Describe how a particular physical attribute may provide an advantage for survival in one environment but not in another (e.g., heavy fur in arctic climates keep animals warm whereas in hot desert climates it would cause overheating; flippers on such animals as sea lions and seals provide excellent swimming structures in the water but become clumsy and awkward on land; cacti retain the right amount of water in arid regions but would develop root rot in a more temperate region; fish gills have the ability to absorb oxygen in water but not on land).
UT.7.IV.2.a Predict why certain traits (e.g., structure of teeth, body structure, coloration) are more likely to offer an advantage for survival of an organism.

3-LS4-2 Use evidence to construct an explanation for how the variations in characteristics among individuals of the same species may provide advantages in surviving, finding mates, and reproducing.