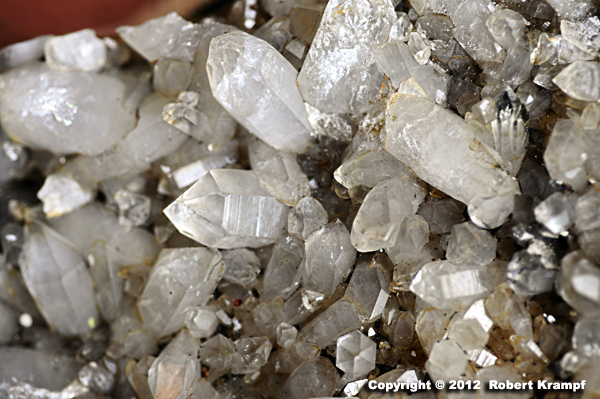 Quartz is one of the most common mineral found on the surface of the Earth, but how important is quartz in your life? Pick a color of dots or tape to use for marking objects that are made of quartz. Be sure you have LOTS of dots, because quartz is a very useful mineral.

Lets start by looking at glass. Quartz is a major ingredient in making glass, so take a minute to look around you. Put a dot on all the windows, mirrors, jars, drinking glasses, drinking glasses, and bottles. Don't forget about the lenses in cameras (don't put the dot on the lens!), or the glass in light bulbs. Without glass, the world around us would be very different.

But quartz has other uses. It is a major ingredient in bricks, concrete, cement, and many kinds of building stone.

Most sand is made largely of quartz, and most rocks contain quartz. Even the dirt in your yard probably contains quite a bit of quartz.

Quartz is a major source of the element silicon. Silicon is used in producing semiconductors for electronics, so put a dot on any computers, cell phones, IPods, digital cameras, and any other similar devices. Silicon is used in photoelectric cells (solar panels), so mark any solar powered calculators or other devices.

It is also used to produce silicone, which is used for adhesives, water-proofing, contact lenses (again, don't put dots on the lenses or on someone's eyes!), and some explosives. Hopefully, you don't have any explosives laying around to put dots on.