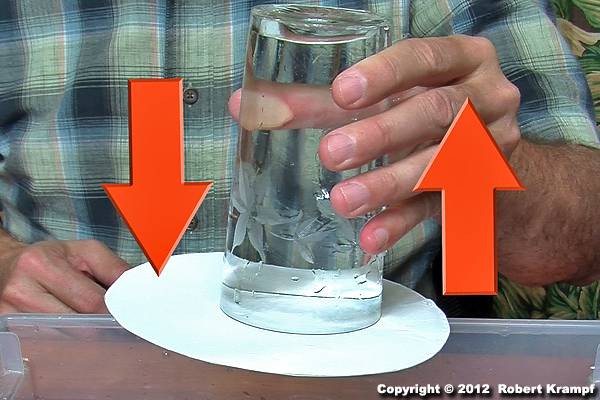 I put a paper plate on top of a glass of water. I turned it over, and the water stayed in the glass.

The weight of the water is pushing down on the paper plate, but the plate stays in the glass because the pull of gravity is being balanced by another force. What is that force?

SC.2.P.13.3 Recognize that objects are pulled toward the ground unless something holds them up.
SC.3.E.5.4 Explore the Law of Gravity by demonstrating that gravity is a force that can be overcome.
SC.5.P.13.4 Investigate and explain that when a force is applied to an object but it does not move, it is because another opposing force is being applied by something in the environment so that the forces are balanced.
SC.6.P.13.3 Investigate and describe that an unbalanced force acting on an object changes its speed, or direction of motion, or both.

UT.3.III.2.c Compare the relative effects of forces of different strengths on an object (e.g., strong wind affects an object differently than a breeze).
UT.4.II.1.c Investigate evidence that air is a substance (e.g., takes up space, moves as wind, temperature can be measured).